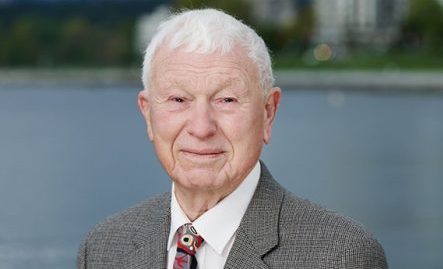 Behind the success of our family business is founder Ralph Schwartzman, who built a fully integrated development and construction company based on trust, respect, innovation and lots of hard work.

Ralph’s father came to Canada from the Ukraine at the age of 14, worked in Winnipeg and soon bought a general store in Saskatchewan and then enlarged to include a lumber mill. He was an innovative man who had very little but built his own business with determination. His son Ralph followed in his father’s footsteps and at the age of 16, he planned and built a water tower in a summer camp at Winnipeg Beach, Manitoba. This water tower stood and serviced the community for many years. After this first project, the path had been set for Ralph Schwartzman to graduate in Civil Engineering, travel from Brandon Manitoba to Vancouver BC, and establish Cape Construction, which would eventually grow to be the fully integrated company that we are today.

When travelling to Hawaii on vacation with his wife in February of 1964, the flight connected in Vancouver and Ralph remembers seeing people golfing in t-shirts when there was still snow on the ground back in Manitoba. Ralph and his wife decided that Vancouver would be a great place to call home and they moved their two small children to British Columbia. Once in Vancouver, Ralph grew The Cape Group to include construction, development and property management services. He pioneered notable building projects including the first Canadian auto mall; The Richmond Auto Mall, Riverport Sports and Entertainment Complex, the Richmond Health and Science Centre, the Airport Gateway Mall, Abercorn Hotel and many other notable projects including the seismic upgrade of the Sun Tower and the renovation of the old cannery at 611 Alexander to become the design center it is today.

Ralph recognizes that over the years, the Vancouver real estate development industry has changed as the market has developed. He remembers years ago when he would be able to do a development deal with “just a handshake”. Ralph lists one of his biggest accomplishments as having built a family company that now includes his daughter Reisa Schwartzman as President and his grandson Zack Ross as COO.

Ralph feels that a successful business is built on sincerity and respect and that his family business has grown successfully because he “talks to people and not at them”. Ralph’s family describe him as an inspirational leader who always seeks and considers the opinions and ideas of colleagues, setting a healthy team environment.

The Cape Group’s ambitious community work comes from Ralph’s example and the value he puts on giving back to the community. Ralph lives with his wife Elaine in the Kerrisdale community and he enjoys golf and tennis when he is not working at the company’s Richmond-based office.